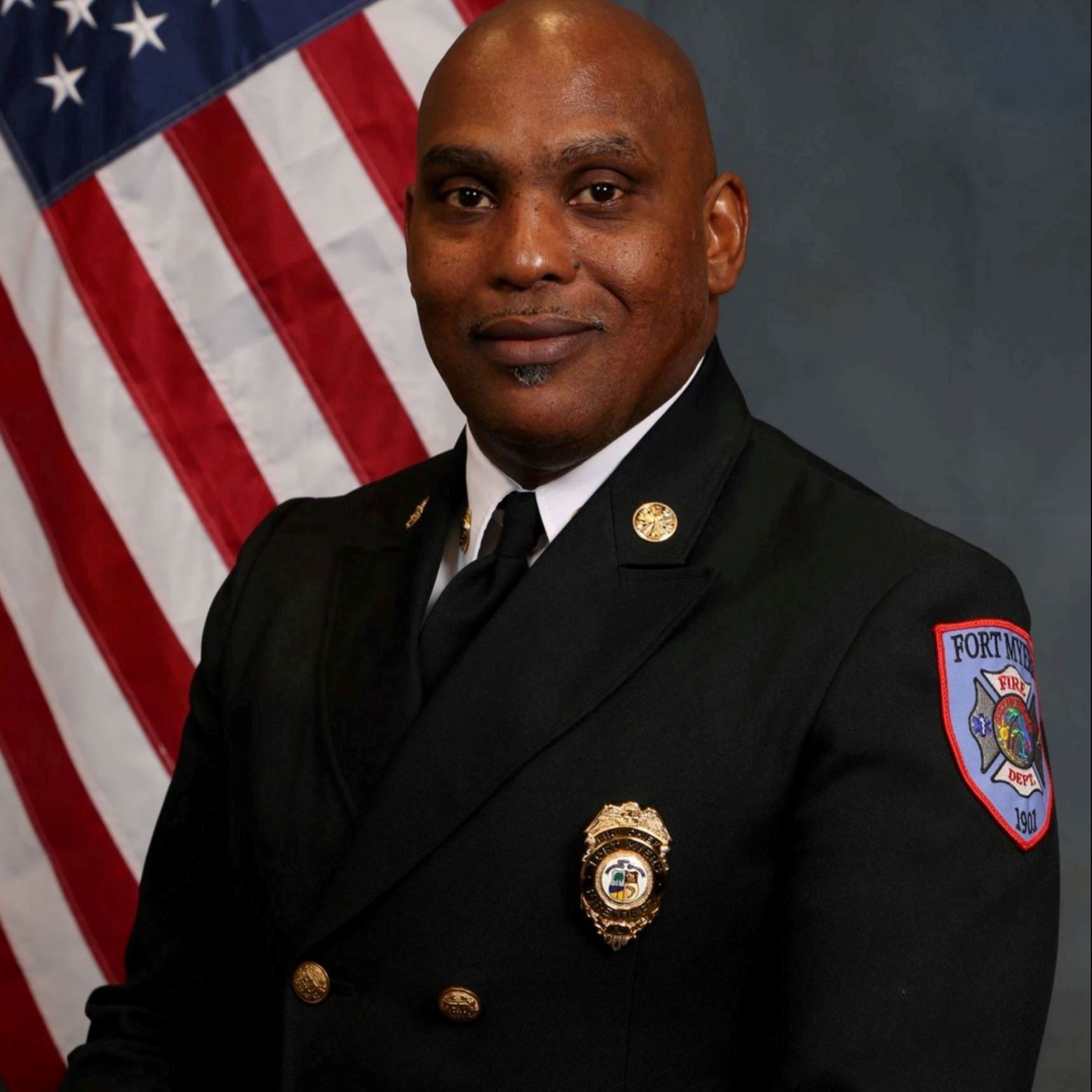 Chief Tracy “TMAC” McMillion graduated from Mid-Florida Tech Fire Academy in Central Florida in 1994 and served briefly as a volunteer for Eatonville Fire Rescue in Eatonville, Florida. In 1996, Tracy was hired by the City of Fort Myers Fire Department where he proudly served as a Firefighter/Paramedic until 2003 when he joined a neighboring fire district, Iona McGregor Fire District. Tracy’s advancement was propelled forward when he was promoted to Training Captain in 2014, then Battalion Chief of Training in 2015, and then Division Chief of Training in 2016. Tracy faithfully served in each of these positions. In March of 2019, Tracy rejoined the City of Fort Myers Fire Department as Deputy Fire Chief. Later that that year, in November, he was appointed to Interim Fire Chief, and December, Fire Chief.

Chief McMillion has an A.S. Degree in Fire Service Technology, an A.S. Degree in Emergency Medical Technology, a B.S. in Management and a Master’s in Administration. Chief McMillion’s philosophy is simple, live and lead as an example, treat everyone with respect and make every encounter meaningful. Tracy is a dedicated husband, proud father and an engaged grandfather. 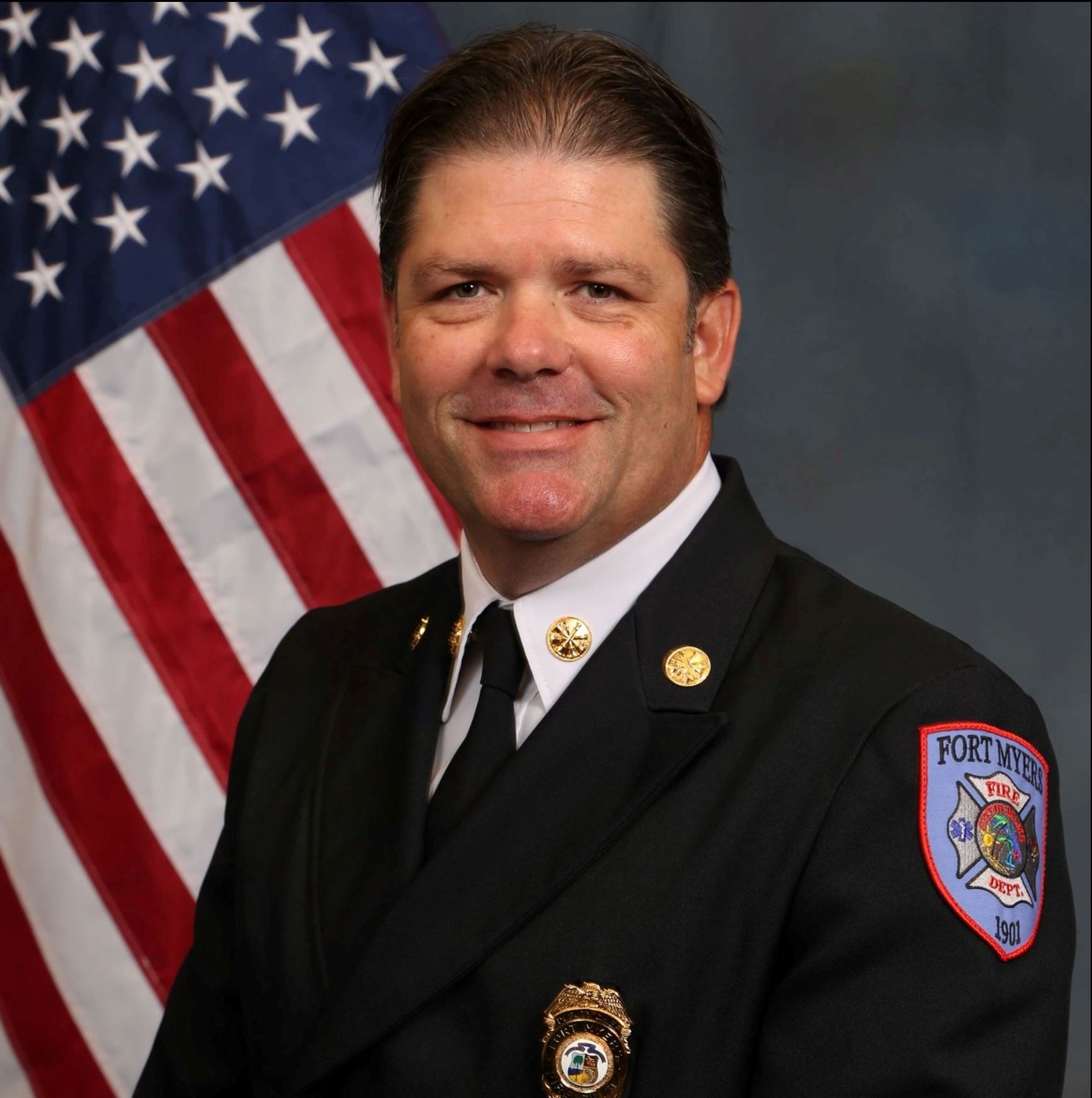 Deputy Chief James Hayden began his career with the City of Fort Myers Fire Department in 2006. Prior to joining the fire department, Chief Hayden held positions in the construction industry as a project manager and in real estate as a Florida licensed real estate broker. Chief Hayden received his bachelor’s degree in business management from Hodges University in 2005 and continues furthering his education in Public Administration. Additionally, Chief Hayden holds several fire certifications including Fire Officer and Florida State Safety Officer. As a member of the Lee County Fire Chiefs Association, Chief Hayden serves on the Communications and Technology Committee ensuring all districts can benefit from each other with respect to applications and technology. Chief Hayden is a Fort Myers native and spent most of his upbringing on Sanibel Island. Now, in his spare time, he enjoys traveling to various camp sites throughout the state with his family and appreciating the outdoors. 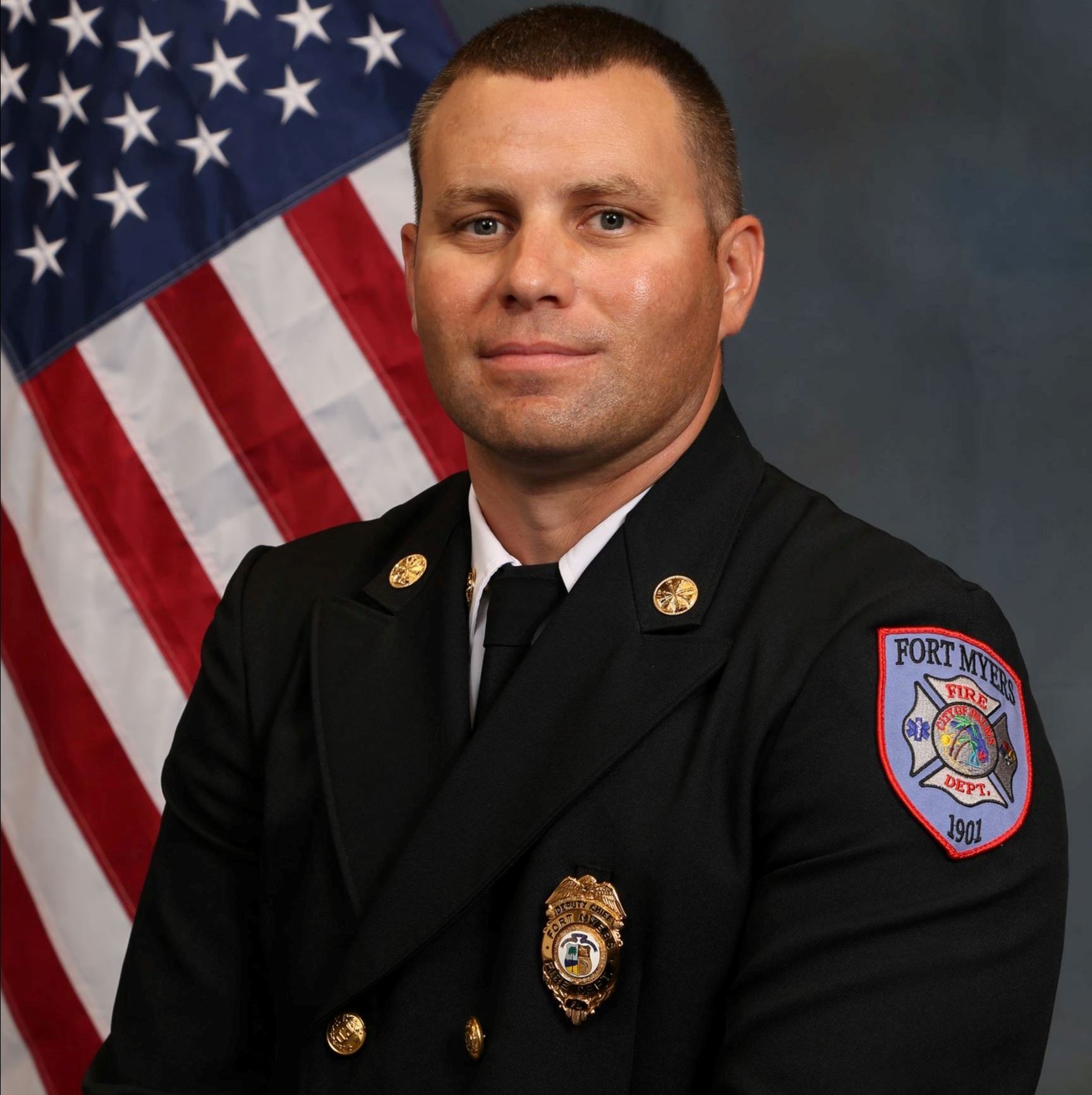 Chief Pullen was born in Trenton, NJ, and moved to the sunshine state as a child. Before the fire service, Lance worked in the construction industry for 10 years. He is married with 2 children who all enjoy relaxing and spending quality family time together. Chief Pullen has held the previous ranks of Firefighter/Paramedic, Engineer/Paramedic, and Captain/Paramedic. His progression through the ranks has been supplemented by a BS in Human Resources and a MA in Administration. He currently serves as the Safety Officer for the fire department and is working towards his Chief Fire Officer Designation through the Center of Public Safety Excellence. 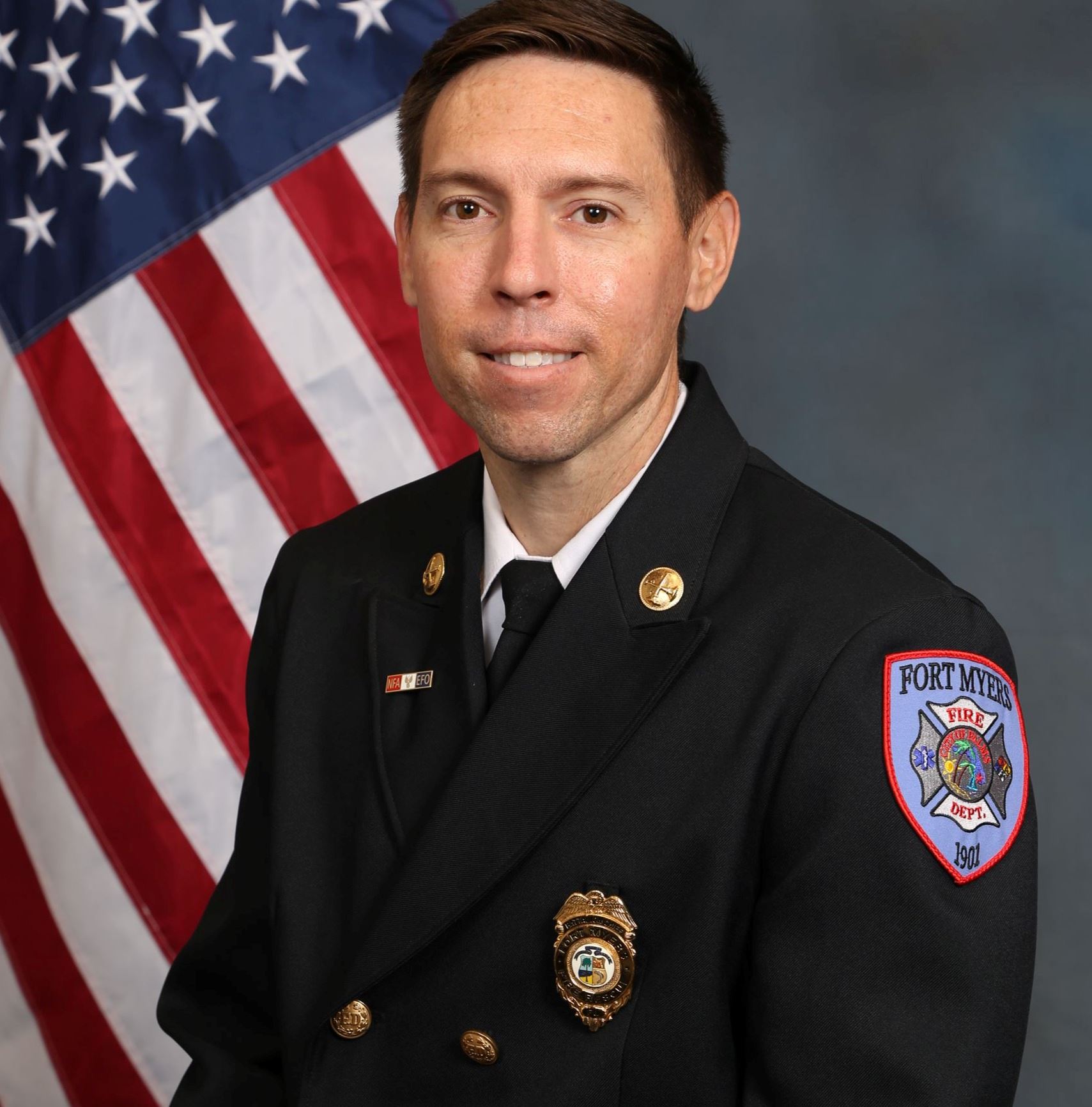 Chief Jacobs was born and raised in Cape Coral, FL. He has been with the Fort Myers Fire Department since 2004 and currently holds the position of Battalion Chief.  He is married with 2 kids, spending much of his free time at the softball or soccer fields. 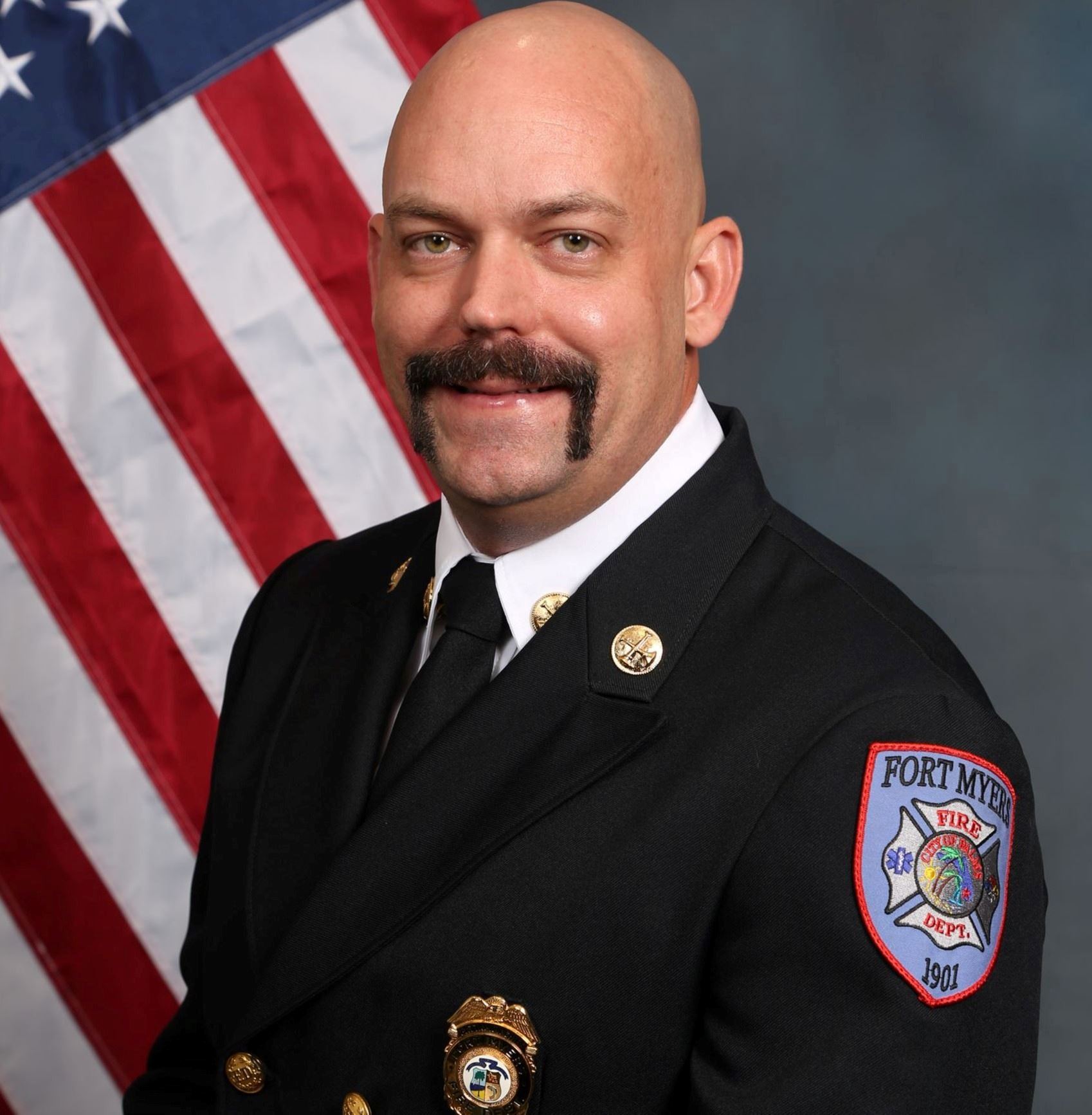 Chief Poland holds an Associate Degree in Fire Science, a Bachelors Degree in Fire Administration, and a Masters Degree in Organizational Leadership with a concentration in Fire Rescue Executive Leadership. Todd was also awarded the Chief Fire Officer (CFO) Designation from the Centers for Public Safety Excellence. Chief Poland views professional and personal development of others as the best part of the job and takes great pride in helping develop the future generations of FMFD 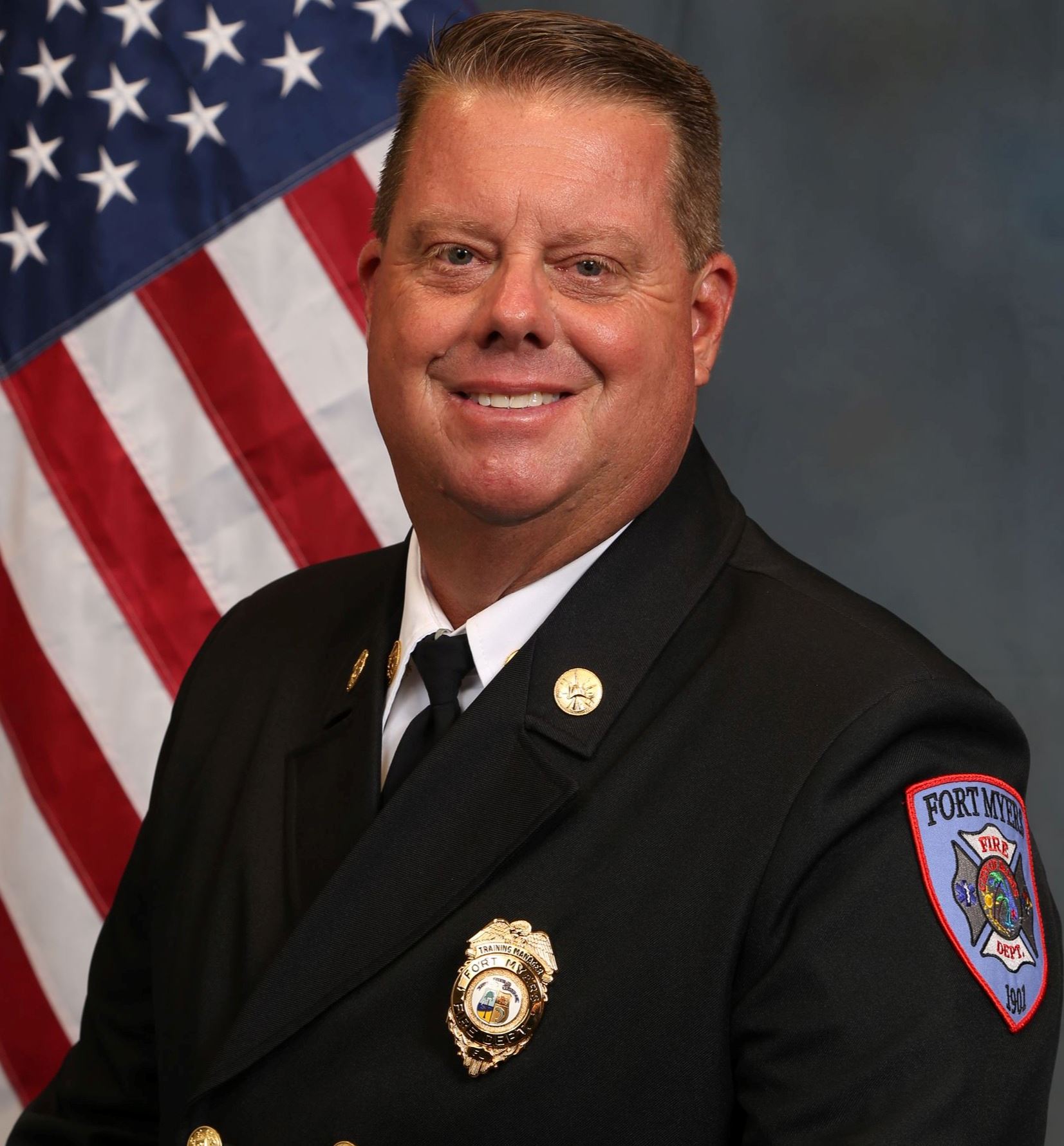 Todd Burik has been with the Fort Myers Fire Department since 2013 and is a 27-year veteran of the fire service, all of which have been local. He is a native to the Fort Myers area, where he currently lives with his wife and two children. Todd had the opportunity to attend the Fort Myers Fire Academy, then return as an instructor, where he taught minimum standards and advanced fire classes for 15 years. He enjoys the position in the training division because it allows him to get out of the office and be involved in the day-to-day training and operations of the department. 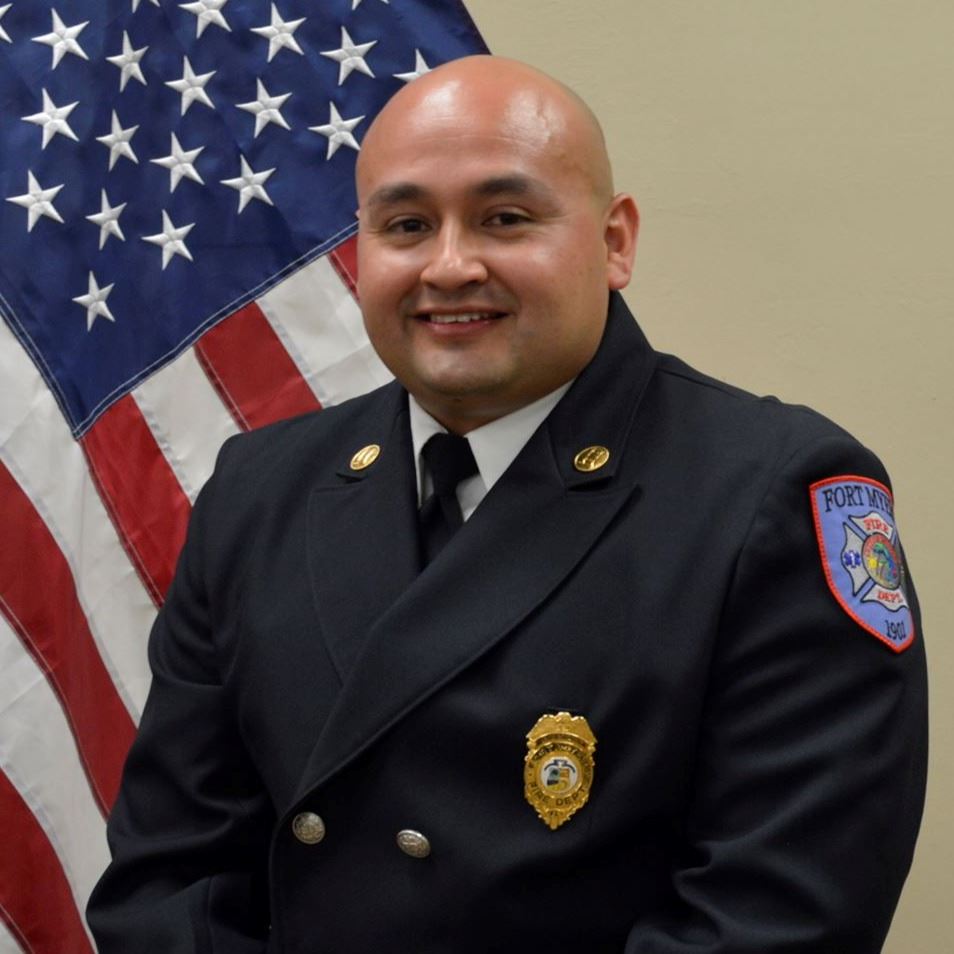 Division Chief Juan Salinas was born and raised in Homestead, FL and is a proud father to Mckenzie, Sophia and Gabriel. Chief Salinas, moved to Labelle back in 2000 were he attended and graduated from Labelle High School in 2002. After graduation, Division Chief Salinas entered the EMS program at FSW and became an EMT in 2003. He then entered the Fort Myers Academy where he received the 2003 Class of Fall Brass Nozzle Award for the highest GPA in his Academy class. Chief Salinas was employed with Collier County EMS form 2004-2005 as an EMT-B where he served the citizens of Naples and Immokalee. He has been a member of the Fort Myers Fire Department since 2005 where he rose through the ranks becoming a credentialed paramedic, Engineer, Captain and Acting BC. He proudly served the Downtown and MLK district while stationed at FMFD Station 1 for 12 years. At his time at FMFD Station 1, he responded to high priority medical and fire related incidents. 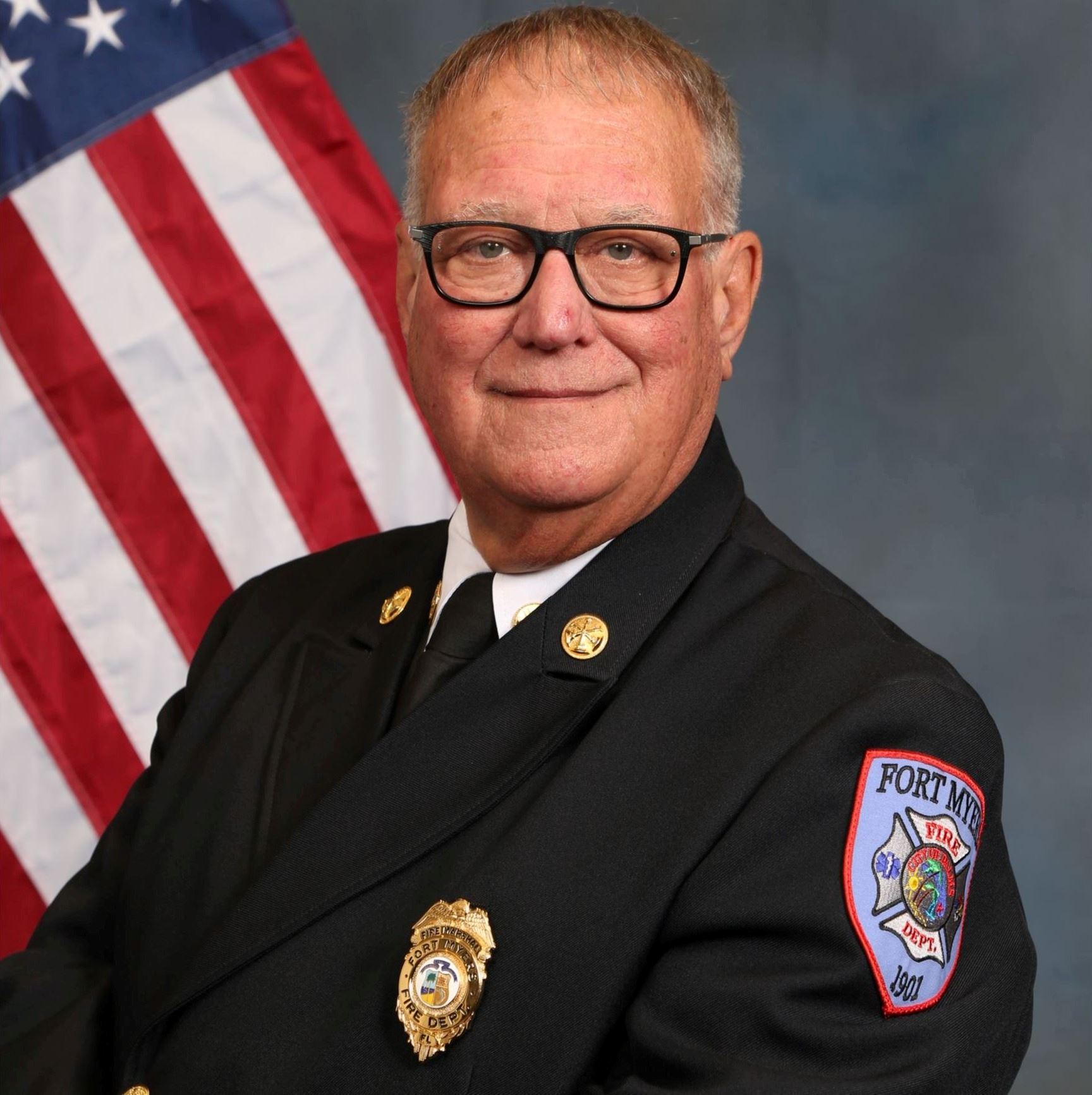 Fire Marshal Reynolds started in the City of Fort Myers in August of 2005 after serving in a fire district for 25 years retiring as an Assistant Fire Chief.  After working up the ranks of fire prevention with the Fort Myers Fire Department, he became the Fire Marshal in 2019. Rick has a BS in Fire Science/Fire Investigation. He is married and has 4 children and 5 grandchildren. In his spare time, he enjoys the outdoors and his animals on a small hobby farm. 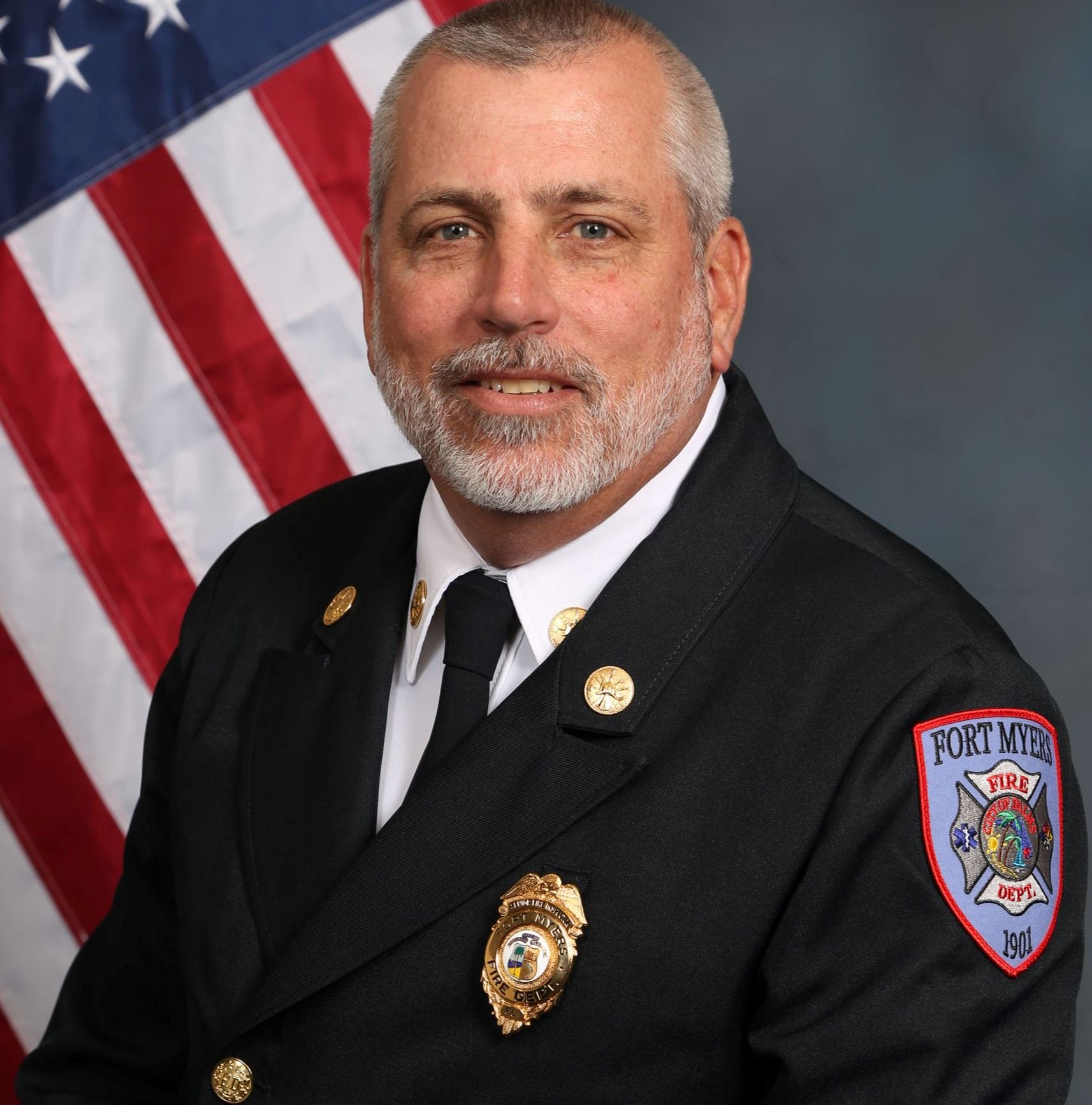 Assistant Fire Marshal Christopher Mulvey has been with the Fort Myers Fire Department since March of 2019. He moved from Connecticut to the area in 2005, with his wife of 31 years and their two sons. In his free time his hobbies include playing golf and traveling with his family.

Christopher has over 30 years of experience in the fire alarm and fire sprinkler industry. He holds a State of Florida Certified Alarm Contractor I License and is National Institute for Certification in Engineered Technologies (NICET) certified in both Water Based Systems Testing & Inspecting as well as Fire Alarm System Installation & Service. 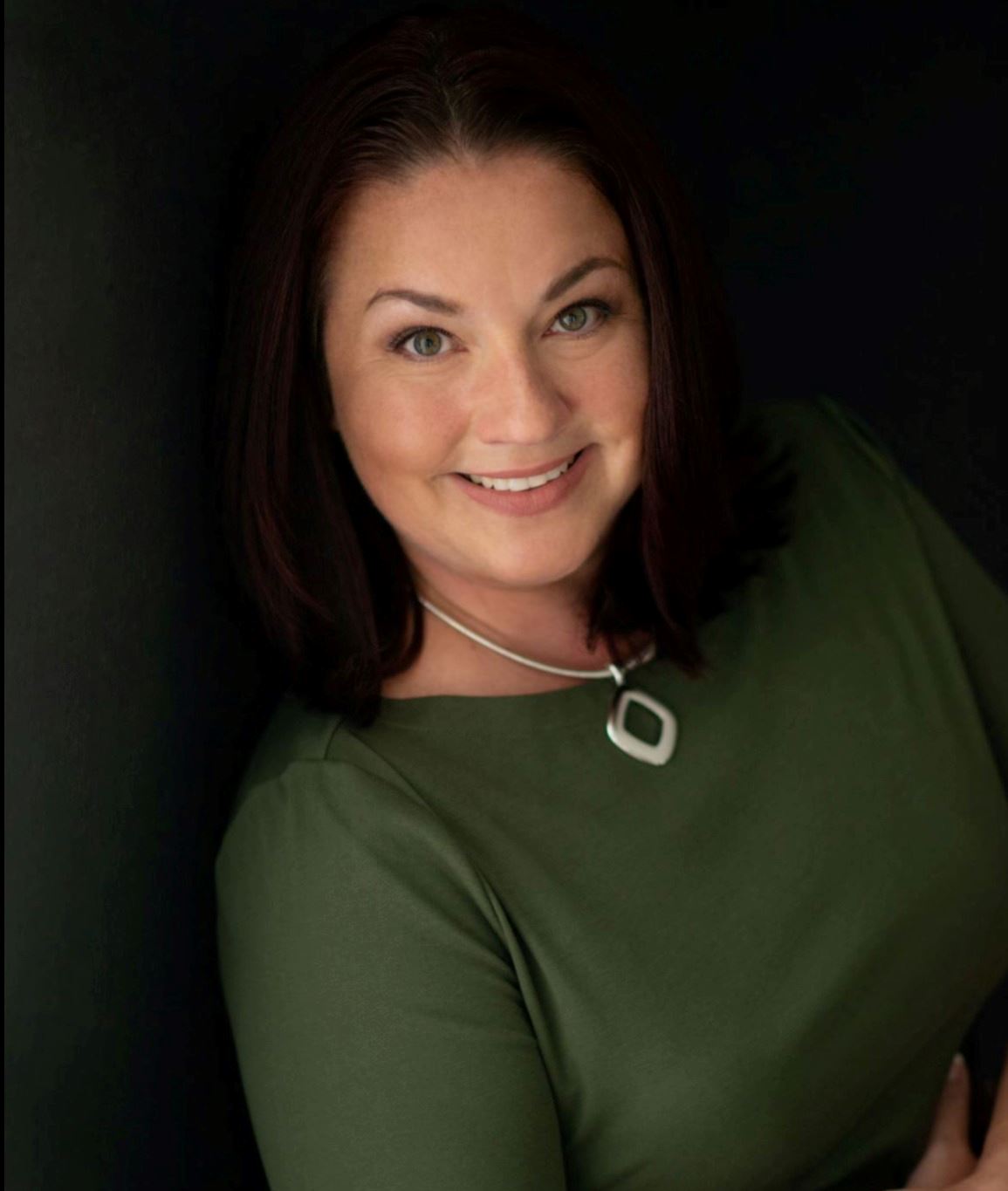 Suzi was born in Kosice, Slovakia and has called Fort Myers home for over ten years. Suzi joined the department in 2018 as a Program & Fiscal Manager. Suzi holds a BS degree in Economics, MA degree in International Relations and European Studies, and a MPhil degree in Political Science. Suzi’s passions include budgeting, data analytics and forecasting. Suzi is an active member of the Florida Government Finance Association and is presently working on obtaining the Certified Government Finance Officer designation. In her spare time, she enjoys reading and spending time outdoors with her two children. 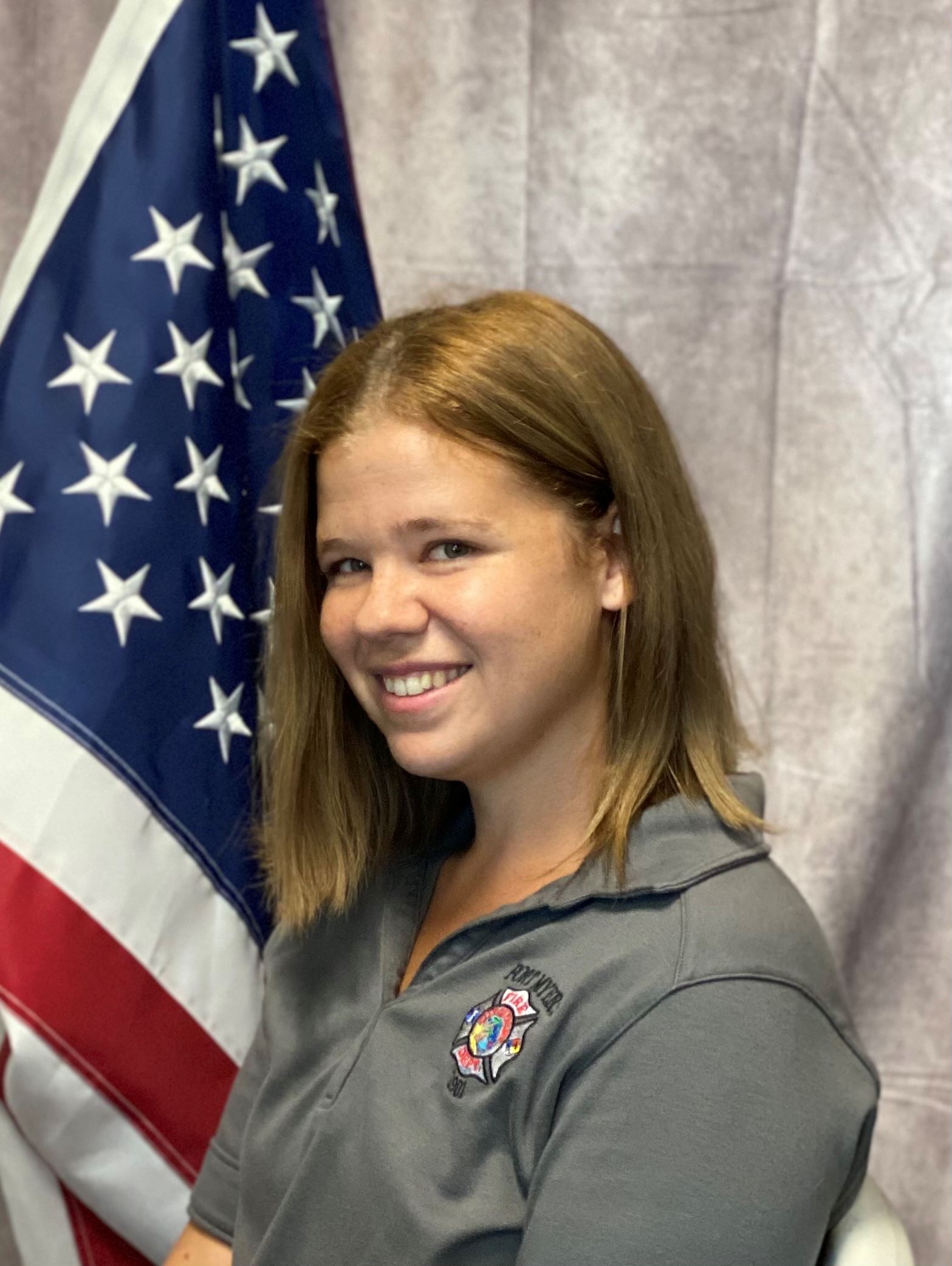